The History of our Church

The Franklin First United Methodist Church has a long and glorious history. The present structure is the fourth building to house the congregation. Eight years after the survey for the town of Franklin, Methodists and Presbyterians organized a Union church in 1820 and worshiped together in a building on the northwest corner of the courthouse square until they built a new church on North Main in 1845. Methodists and Presbyterians worshiped together until the Methodists bought out the Presbyterian interest. In October, 1867, a storm blew down the super-structure of the North Main Street Church. For the next two years, the Methodists and Baptists, who had been meeting together for some time, continued their joint worship in the basement. In 1869, the Methodists moved to a new church on Madison Street. This church had the first pipe organ in Franklin; that organ was moved to a new building and used until 1915.

Discussion of a new building began in 1909. In 1910, a committee purchased the Boisseau Hotel property for $3,200 and sold the Madison Street property in 1911 for $1,500 exclusive of fixtures. The congregation placed the cornerstone for the new sanctuary on July 26, 1911 and dedicated this building on the fourth Sunday of August, 1915.

In the 1950’s, the congregation added the chapel on the north side with a large room above and an annex for the growing church school. In 1964, the annex to the south provided more space for church school along with remodeled kitchen and social hall. In 1972, remodeling and redecorating of the sanctuary included the addition of new pews. In the early morning hours of July 28, 1988, fire destroyed the Hughes Hardware building and caused damages of more than $70,000 to the adjacent educational building and basement of our church. Even with repairs restoring this section of the building, the need for more space to accommodate educational and fellowship activities continued to grow.

During his tenure, Doug Wilson began the vision of a Christian Life Center. The congregation purchased the remaining property on the block occupied by the church. Under the leadership of Jerry A. Smith, a building committee developed a plan, the congregation pledged monies for the projected $1,343,000 cost, and members held groundbreaking ceremonies on June 30, 1996 for the new Christian Life Center. On November 16, 1997, the Franklin First United Methodist congregation consecrated the new building. During the same time, extensive remodeling took place in the sanctuary and educational building.

Franklin First continues in its mission to witness for Jesus Christ. While that witness continues through traditional ministries, it also reaches out to the community in new and dynamic ways. 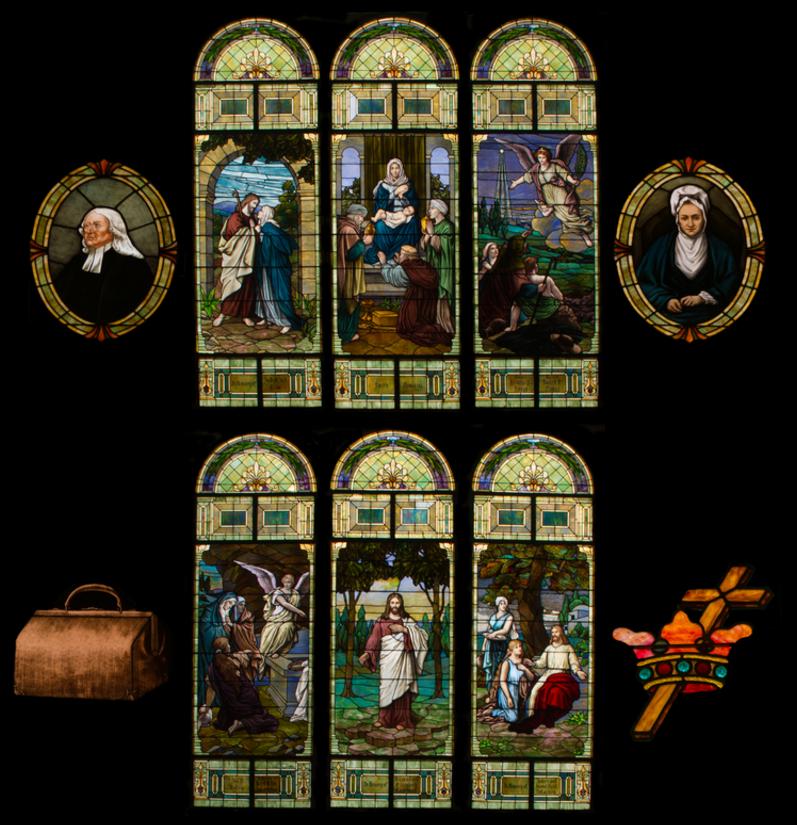 Satchel window
​a gift from the Traveling Men

Cross and crown symbols of the humble reign of Jesus